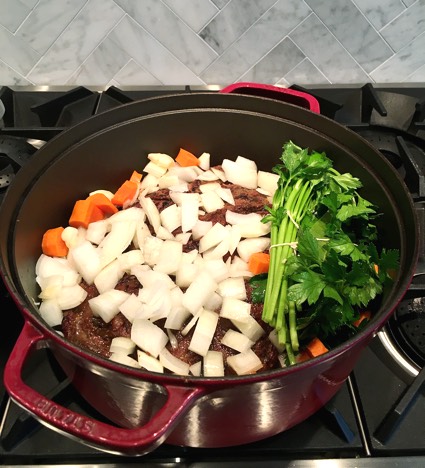 Yesterday for a dinner party I decided to add a new flavor to a beef braise: smoke. The results were quite a hit when combined with the braising sauce.

The cut was a 4 pound boneless chuck. I gave it a dry rub of:

The peppercorns and coriander seed were ground in a mortar and then mixed with the other components before applying the dry rub all over the beef. 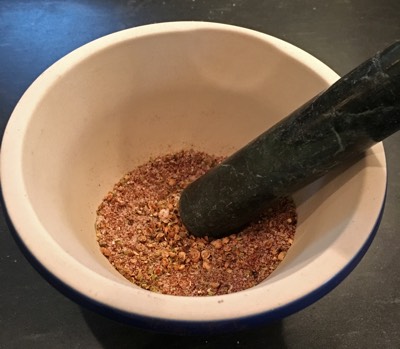 To smoke the meat, I used a Weber kettle grill and smoked the meat for about an hour. It’s important to smoke *before* you braise, not after. I used about a half-chimney of royal oak wood charcoal (I prefer that to briquettes), and about 4 chunks of cherry wood, which had been soaked in water for over an hour ahead of time. Once the coals were quite hot, I spread them on one half of the grill bottom, and put a pan filled with some water on the other side. Make sure you place the meat above the pan, and not directly above the coals (i.e. you want indirect heat). In this case, I ended up closing both the bottom and top vents, letting some air in only periodically. I made sure the temperature didn’t rise above 250F/300F because my goal was to get some smoke flavor, not dry out the meat. 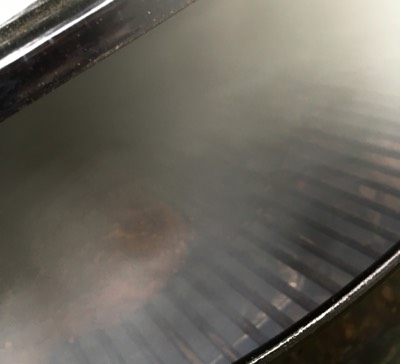 After an hour of smoking, I brought the meat back inside. I seared both sides on high heat in the dutch oven for about a minute a side, removed the beef to the side, and deglazed the bottom with a little bit of water. One of the onions, chopped, went on the bottom of the pan, and the beef was placed on top. Then I spread the remaining onion, carrot and garlic around and wedged the bouquet garni in the side. Two cups of white wine were added, and enough beef broth to bring the liquid to just over a third of the way up the meat. I had made a beef broth earlier in the day with beef shank, but you can just use water or all wine if you want.

The oven had been pre-heated to 295F and the dutch oven, covered, went in for 5 hours. I let everything rest while guests arrived and we started the meal, and as we got closer to this course, took the meat out of the pot and popped it into the 295F oven in a baking dish to stay warm. The liquid fat at the top of the braising liquid was skimmed off, the bouquet garni removed, and then I used an immersion blender to puree all the vegetables into a sauce.

The last step was probably the most important. Even with just an hour of smoke, the meat had absorbed a lot of the smoke flavor, and on its own was a bit more “BBQ” than I was going for (albeit delicious). But paired with the sauce of the braising liquid, the combination balanced out perfectly into a delicious mix. Suffice it to say that there were no leftovers. Unfortunately, I was moving a bit too fast in the later part of this process to take pictures, but wanted to record this one as a success.

We paired this with some broccoli rabe that had been parboiled and then sauteed with a bit of garlic, lemon juice and hot pepper flakes. Oh, and a 2004 Barolo that we’ve been saving in our basement for years.