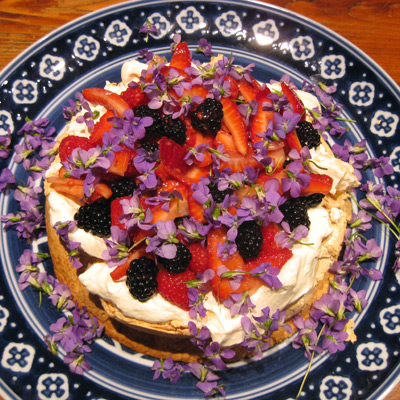 Every year on my birthday, my family would have my favorite dessert, Pavlova. Inspired by the famous prima ballerina, Anna Pavlova, who toured Australia in the 1920s, this meringue, whipped cream and fruit concoction is an Australian institution. I’ve since heard that it has been also claimed by New Zealand, which Pavlova also visited on her 1926 tour. This is, of course, just one in a long line of disputed cultural icons ranging from film actors to politicians. Difficulties in Australian/NZ relations aside, it’s a pretty delicious dessert.

Being a busy working woman, my mother purchased my birthday pavlovas from Pavlova Pantry — yes, the dessert was so popular in Sydney through the 1970s and 80s that a chain of these popped up serving huge and quite good pavlovas. I don’t know if they still exist. Much later, after moving to the US, I found that it is really easy to make yourself, and quite a bit nicer than the store-bought variety.

Add:
1 cup sugar, ¼ cup at a time until incorporated and mixture is stiff and glossy

Put mixture into a lightly greased and floured 8” springform pan, heaping so slightly higher at sides than center (don’t worry about what the top looks like, as this will be completely covered at the end)

Bake for 1 hour until firm and lightly browned. The pavlova will have a crisp meringue crust but stay moist on the inside

Cool slightly and unmold. When completely cool, top with 1 cup heavy cream whipped stiff. Top this with berries tossed in Grand Marnier. You can also use other fruits (e.g. passionfruit, kiwi fruit). Refrigerate uncovered until ready to serve.