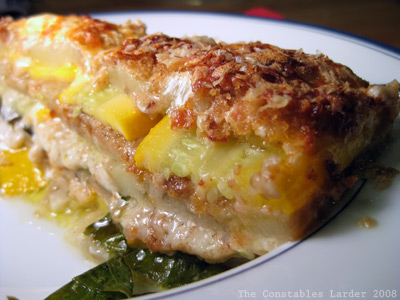 [Update 8/30/09 a year later, I made this dish again and loved it as much, if not more.  I am updating the recipe to be less of a record of the original creation and more of a general recipe).

I seem to be on this vegetarian comfort food kick. Tonight’s dinner was a lovely success, layering eggplant, zucchini, cheese, breadcrumbs and basil. I completely winged it (having only about 2 brain cells left to rub together after a late night and a long day) but at the first bite Lisl and I were both at “wow!” I suppose I shouldn’t be surprised… melted veggies with gobs of cheese and olive oil? As Mr. Powers would say, yeah baby!

In a food processor, pulse your bread into coarse breadcrumbs. Preheat oven at 350F.  In a baking tray, spread out the crumbs and bake, occasionally stirring around, until lightly browned.

Peel the eggplant with a vegetable peeler and slice lengthwise into slices about 2 millimeters thick.  (Optional: salt both sides of the eggplant and place in a colander to drain for about 20 minutes. Dry the slices with paper towel. Then slice the zucchini the same thickness.

Heat a large pan with olive oil on medium to medium-high heat and saute your eggplant and zucchini for 30-40 seconds a side, adding more olive oil to the pan between each batch. You don’t need to cook the slices all the way, just enough to soften them.

In a deep, medium-sized baking dish baking dish, layer your gratin by alternating the ingredients as you wish, or in this order:

Don’t be afraid to cut your slices of eggplant or zucchini into the necessary size to fit the gaps in a layer. Where it calls for salt and pepper, just add 2 or 3 turnings of a grinder.  The order of the layers and ingredients is anything but scientific — the flavors will blend together nicely. Out of focus picture but you get the point…

Baked for 50 minutes at 350F. You get a delightful crust and a totally melted core. The layer of basil really permeates this dish nicely. It’s rich, but oh so satisfying. This dish can handle a hefty, peppery red wine should you be so inclined. I love how this one came out.