The peach blossoms are barely out, but weather’s whim delivered 80+ degree sunny days this weekend. It felt like a whiplash jolt into summer, and I had to keep on reminding my optimistic brain that the local produce was still some time away.  Not that I am complaining — I fired up the grill and we ate like kings. 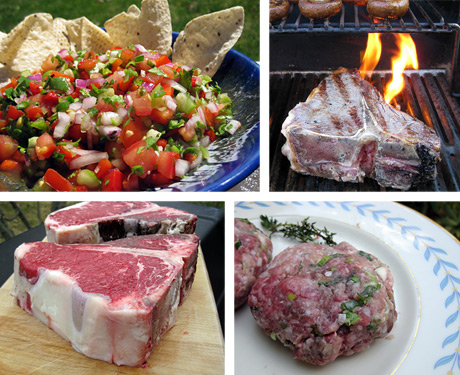 I had thought that the re-emergence of warm weather would put me in a vegetarian mood, harkening back to those wonderful Food Blogga salads from last year.  That was before I made a stop into my favorite butcher, Fleishers.  So much for being leaf-eaters. We devolved into fully fledged T-Rex.

Josh Applestone (Fleisher’s proprietor — should it be a requirement to be in the food business with a great last night like that?) gave me a great deal on two monster porterhouse steaks (bottom left in that pic), which were between 2 and 3 inches thick.  Fleishers’ beef is entirely grass fed, and while some argue that “corn finishing” improves marbling, I love the flavor of grass-only, and tend to be fairly minimal with how I treat cuts like this.  I got some hickory chips going, salted one side, seared for 2 minutes with salted side down, salted the top side, and flipped for another 2 minute sear, then moved them on the grill to cook with indirect heat and smoke until done.  The thickness of the steaks required a little more time, and the meat came out beautifully. Three of us shared one of those monsters!

One thing I like to do during grill season is play around with the flavors and concept of a “burger”.  Two examples from this weekend:

We didn’t survive solely on meat, however.  I broiled ramps with olive oil and kosher salt, made my favorite grilled mushrooms, and there were other supporting-actor veggies.  I also threw together a refreshing little salsa, which we ate on toasted bread and with chips.  I don’t know that it deserves a recipe, because really it’s just:

Once you start eating it, it’s hard to stop. 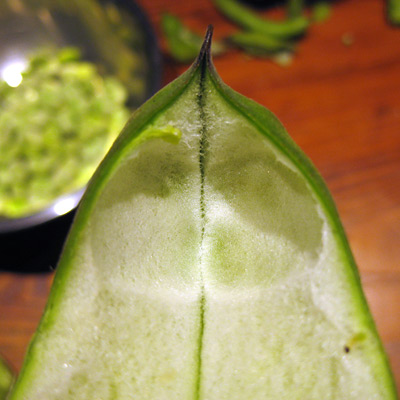 I was also pleased to cross two things off of my “must do” food list (care of the Adams market in Kingston — why the hell can’t we have a market as good down in Westchester?).  I finally got ahold of some fresh fava beans (believe it or not, I had never worked with them before), and I also found winter savory at the garden store and planted some in the herb garden.

That picture above is the pod from a fava bean.  It has the coolest puffy foam padding on the inside.  I have to wonder if packaging engineers have studied it for replication.  I ended up working them into a nice salad, but my grand idea for their use got stymied by parental duties. Ah, kids.

Winter savory is an herb I’ve used in dried form, and it is referenced often in books on southern french cooking.  I have never seen it fresh in a market, so was tickled pink to spot the young plants.  The fresh leaves are absolutely delicious (along the same lines as oregano and marjoram, but different), and I can’t wait to work with it. The deer better stay away!

Finally, lest you forget that it is still only April(!), I’ll close with a shot from this gorgeous thicket of forsythia I discovered in the Rye nature reserve. 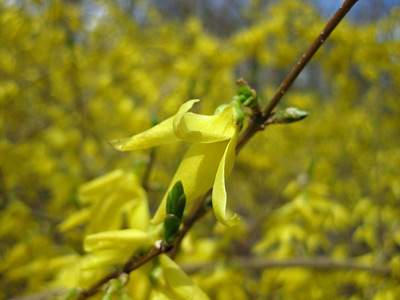 8 thoughts on “An Early Taste of Summer”