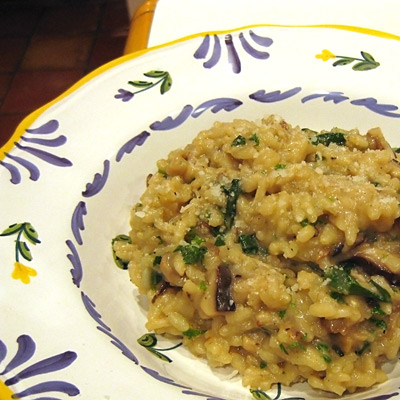 Every once in a while, you read amusing stories about the tension and strife that ensue when cooking in your mother’s kitchen. The hovering. The unsought advice. The skeptical brow. Unfortunately for you, dear reader, I have no such stories from this recent dinner. In the making of this ramp and mushroom risotto, I had free reign. Perhaps it is because I am male, or perhaps it is simply the nature of my mom, but there was no drama to rivet this tale.

I think we got most of the mother-child conflict out of our systems when I was in high school and needed heavy pushing to study and get into a good college. Her obstinate determination at that task exceeded even my own innate and not-insubstantial stubbornness. In the end, her mission was accomplished, for which I am eternally grateful.

Turning the tables and making her a great meal is the least I can do. This risotto, while not innovative in the slightest, was particularly good for three reasons: a homemade vegetable broth made with patience, the use of the last of my ramps, and a mix of porcini, shiitake and oyster mushrooms.

Make the broth early in the day or on a previous day by combining all the ingredients, bringing to a boil, and then immediately reducing to a very gentle simmer. Cook for 5 or 6 hours, discard the vegetables, and strain the broth through a fine strainer.

Take another handful of dried porcini mushrooms and soak in boiling water for 15 to 20 minutes before starting the next step. Add most of the soaking liquid to the broth, but discard the last bit with the sediment from the mushrooms. Remove any hard parts still on the mushrooms and chop.

Bring the broth to a boil, reduce to the lowest heat and keep covered. Prep your pecorino cheese and parsley at this point.

In a large, heavy-bottomed pot (or high-sided saucepan), melt the butter and olive oil on medium heat. Add in the onion and chopped white stems from the ramps and saute for several minutes. Stir in the 3 types of mushrooms and continue to saute for 5 to 10 minutes. 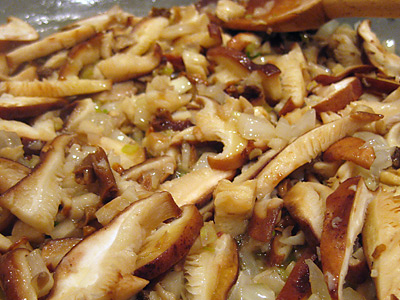 Stir in the rice and cook for several minutes, stirring well.  Turn up the heat to just above medium. Add in the vermouth, and stir it into the risotto, and then add a ladle full of broth. Stir until the liquid is mostly absorbed by the risotto. Add another two ladles of broth and then repeat the stirring process, the addition of liquid, the stirring, etc. Do not let the risotto dry out at any point, and do not add so much broth at any point that you flood the pot.

After 20 minutes, add in 1/8 tsp of salt, some freshly ground pepper, and stir in the ramp greens. 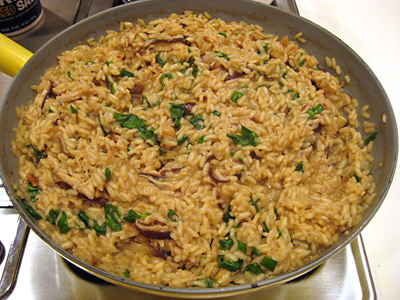 Cook for another 5 minutes and begin tasting for tenderness and salt and pepper. You want the risotto to be tender but not mush. It will probably take between 7 and 8 cups of the broth, and be done somewhere between 25 and 35 minutes.

*save the parsley until the very end, because uncooked it adds a nice fresh flavor and texture to the dish.

Note: some argue that you do not need to continually stir risotto, but I like the results that arise from the extra diligence.

I’ll depart with a little taste of most-welcome spring:

12 thoughts on “Ramp and Mushroom Risotto”