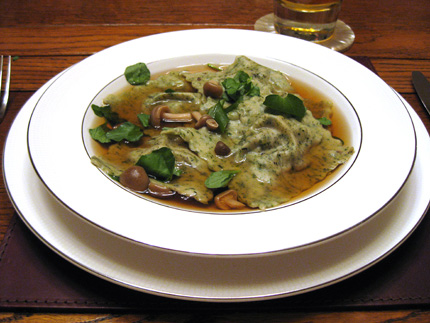 That’s a mouthful to say, but was an absolute delight to eat.  It was also my first attempt to make up an Asian-European fusion dish, and emerged out of my need to give the old creative cooking juices a swift kick in the pants.  For the last few months, I poured my energy into a startup project, but unfortunately it became clear that the necessary funding resources were not going to emerge. Creative cooking took a back seat, but last night’s meal was its way of pounding a fist on the table and crying “my turn, dammit!” I was quite proud of the results, if I can say so myself.

I’ve been a fan of fusion since it burst on the New York City restaurant scene in the mid-nineties (flashback to an incredible dinner with Aun, my then-roommate and now the author of the marvelous blog Chubby Hubby, with a Japanese-Italian pasta-and-squid-ink dish served in a bowl made from a huge cheese rind. I love me some cheese!).

With the arrival of my pasta machine (recommended by Zenchef, and after using it last night, I love it!), I decided that I wanted to serve ravioli with a Japanese broth. This led to cracking open Kimiko Barber’s The Japanese Kitchen, which has been waiting to be read for the last 6 months, and a hop down to the Japanese grocery store in Harrison, NY.  This is a fairly involved meal, so with no further ado: 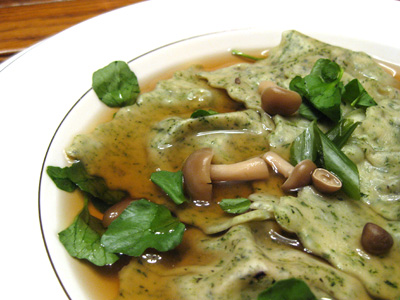 – Final Broth –
All of the dashi broth from above
1 cup of the mushroom broth
2.5 tbsp dark soy sauce
2 tbsp mirin sauce
pinch of salt to taste
1 bunch of buna shimeji mushrooms, trimmed
handful of fresh watercress leaves
greens from 2 scallions (spring onions), sliced at an angle

Making the Dashi broth
Place the water, konbu, and bonito flakes in a saucepan and bring to a boil over medium heat. Once the water is boiling, reduce the heat to low and cook for another 5 minutes. Pour the broth through a strainer lined with a paper towel and set aside.

Making the Mushroom broth
Combine the ingredients in a stockpot, cover, and bring to a boil. Loosen the cover and let simmer for an hour or two. Discard the vegetables, pour the broth through a strainer lined with a paper towel and set aside. 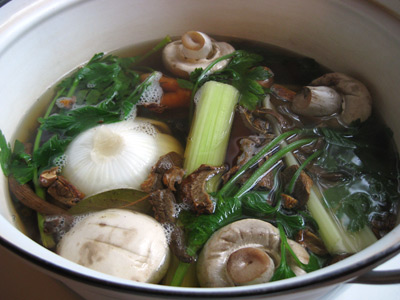 Making the Filling
Heat up a few dashes of olive oil in a large saute pan on medium-low heat, and saute the shallots for several minutes, then add the shiitake mushrooms and chard stems and cook for several more minutes. Stir in the finely chopped chard leaves and parsley. As the vegetables start to dry in the pan (you will feel them start to stick to the bottom of the pan), stir in a ladle of the mushroom broth. When the broth has cooked down, add another ladle-ful. Add in the finely chopped pine nuts, turn the heat all the way down, and cook, covered, for a couple more minutes. Turn off the heat, stir in the cheese, taste for salt, and let cool.

Making the Ravioli
Boil the beet (or chard) leaves for 4 minutes, drain, let cool, and then squeeze out as much of the liquid as you can. Very finely chop.

Either on a work surface or in a bowl, combine the flour, egg, and chopped beet leaves, and work together with your hands until it is fully integrated. Add small amounts of flour until the mass no longer feels moist or sticky. Marcella Hazan has a simple test to see if you need more flour: “wash your hands, dry them… press your thumb deep into center of the mass; if it comes out clean, without any sticky matter it, no more flour is needed.”

Knead the dough for 8 minutes on a dry work surface: steady the dough with one hand, and push down and forward with the heel of the palm of your other hand. Fold the now-stretched dough back in half, give it a half turn (always in the same direction), and repeat.

Cut off one sixth of the dough (Marcella says that “the pieces of dough you end up with for thinning should be three times as many as the eggs you used“), and keep the rest of the dough wrapped in plastic wrap. Thin the dough, and start working it through the pasta machine from the widest setting until you are happy with the thickness (I went to setting 8). The strip of pasta should be about 3 to 4 inches wide.

Cut the strip in half, and place small mounds of the filling about 2.5 inches apart. With a pastry brush and a bowl of water, gently moisten the pasta around the filling, and then place the second half of the pasta strip on top and press around the filling. The water helps create the seal. Then with a knife or pasta cutter, trim the pieces of ravioli and place on a dry, clean kitchen towel.

Repeat these steps until you have made all the raviolis.

Finishing the Dish
Bring a large pot of salted water to boil, for cooking the ravioli. Place the reserved dashi broth in a saucepan and add a cup of the mushroom broth, the soy sauce, the mirin, and a small pinch of salt. Bring it to a simmer. 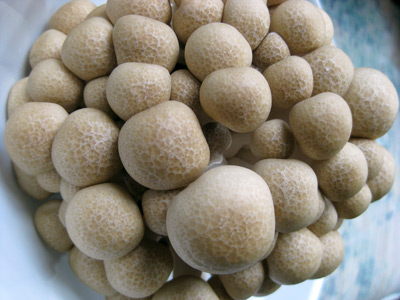 Place the ravioli in the boiling water and cook for 5 minutes. At the same time, place the chopped scallions and the shimeji mushrooms in the simmering broth, and cook for 4 minutes. Lay out your bowls for plating and place a bunch of watercress leaves at the bottom of each bowl. During that last minute before the ravioli is ready, ladle out a little broth and half of the scallions and shimeji mushrooms at the bottom of each bowl. With a slotted spoon, distribute the ravioli among your waiting bowls, and then top off each bowl with the broth and remainder of the scallions and mushrooms.

Serve and enjoy! I paired this with Sapporo beer. 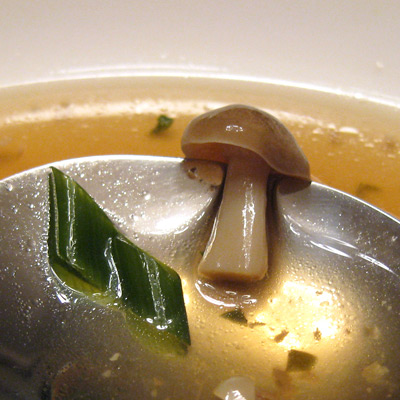 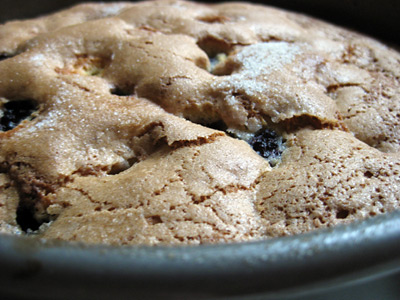