I winged this dish on Friday night and enjoyed it enough that I wanted to record the essence. The ratios are not battle-tested, but one of the prime purposes of this blog is to help me remember stuff like this.

In a large saute pan, melt the butter and olive oil on medium low heat and then add the onion. Cook slowly, stirring occasionally, until the onions are soft and translucent. Add in the mushrooms, thyme, a pinch or two of hot chili pepper flakes, and some salt and pepper and saute until the mushrooms are soft.

Add the flour and cook, stirring, for 2 minutes. Add the vermouth (or wine) and after a few minutes add the milk. I don’t know exactly how much milk I put in but I would guess about 2 cups. Bring the milk to a very gentle simmer, stirring fairly frequently, and control the heat so that it does not start to simmer more aggressively. Stir in the mustard and add salt and pepper to taste. Cook for another 10 minutes or so, giving the sauce time to thicken and come together.

Don’t forget to start the rice.

Add the chicken, cover, and poach until they are cooked through (probably 5 to 10 minutes, depending on thickness of pieces).

Serve the chicken on top of the rice, heaping on the sauce. 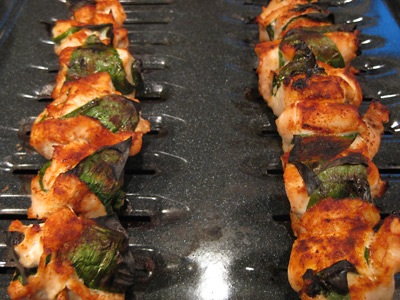 If you are like me, and have used your ramp whites for pickling, then you have a whole bunch of delicious ramp greens to use before too much time passes.  Here is a really simple thing to try that got a great response from Lisl:

If you are using wooden skewers, soak them in cold water.

Place chicken breasts between two sheets of plastic wrap on a sturdy surface, and thin them to 1/4 inch or less by banging with the bottom of a heavy sauce pan (cast iron has *so* many uses!).

Cut into slices 1.5 inches thick and about 4 or 5 inches long. Sprinkle with salt and pepper, then place a ramp green on top, roll it up, and place on the skewer.  If you end up with some smaller pieces of chicken, just cut them into squares about the same height/width as your rolls, cut up some ramp greens to about the same size, and alternate chicken and ramp green on the skewer, packing together closely.

Sprinkle both sides of the skewer with a little more salt, pepper, and a liberal amount of the hot paprika. Flip and do the same for the other side.  Let rest for 20 minutes or so. 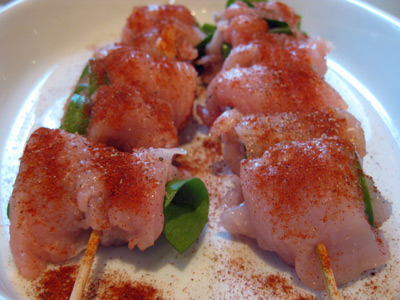 Ideally you will cook these on a hot grill, but in my case my grill is not totally fixed, so I broiled them right up under the heating elements in the oven for just over two minutes a side.

Serve by drizzling e.v. olive oil on top, and with a slight sprinkle of coarse sea or kosher salt.  The ramp flavor really comes through and it all works together nicely. Don’t forget the olive oil at the end!

At 11pm, I felt relief. A few minutes later, I felt admiration for McCain showing his true colors by conceding with dignity. Then Barack stepped up and said what we all knew was true: tonight we have only opened the door — now the hard work truly begins. We shall see what kind of President Barack Obama really becomes, but I am glad this country chose hope and change. Americans believe that our country is a beacon, and it is time we earned that belief once more. This country has a lot to do and fix, but tonight, I am happy.

But wait, food what when how?

Tonight we made two dishes: a roasted chicken stuffed with olives and potatoes from Stacey at Stacey Snacks, and a fennel gratin from an Alice Waters recipe. Both were absolutely delicious.

Cut the fennel bulbs in half and then into wedges. Mince up a small amount of the fennel fronds and set aside. Boil the wedges in salted water for 5 minutes. Remove the fennel with a slotted spoon and set aside. Reserve 1/3 cup of the cooking liquid.

Next, make a white sauce by melting the butter on medium heat, adding the flour, and cooking for a couple minutes, whisking constantly. Then slowly add the milk and fennel cooking liquid in small amounts, whisking as you go. Once the liquid is mixed in, lower the heat to a very soft simmer and cook for another 15 minutes. Turn off the heat and stir in a couple of pinches of salt, and the nutmeg, paprika, pepper flakes, and parmesan (note: Waters uses cayenne pepper instead of the hot paprika and pepper flakes).

Butter a baking dish and spread out the fennel wedges, and spoon the sauce on top. Bake in an oven set at 375F or 400F for 30 minutes or so (note: Waters calls for 375F, but we had the oven set to 400F since we were also finishing the chicken roast). When the tops are browned, remove, sprinkle with a little salt, pepper and the fennel fronds, and serve.

Comment: I found that the amounts for the white sauce led to a thick sauce that did not cover all of the fennel, but that actually ended up being a good thing, keeping the dish from being too rich and allowing you as the eater to choose what kind of mouthful you wanted. The other part of the meal was a roast chicken with potatoes, olives, capers, rosemary and other good stuff. We spotted this recipe on Stacey Snacks (link), and Lisl prepped and cooked the dish. It was marvelous. Follow that link to the recipe, and listen when Stacey says to make sure that the potatoes are cooked before you put it all in the oven, because the potatoes stuffed inside the chicken will not cook all that much, even in the oven for 1 hr 15 minutes at 400F.