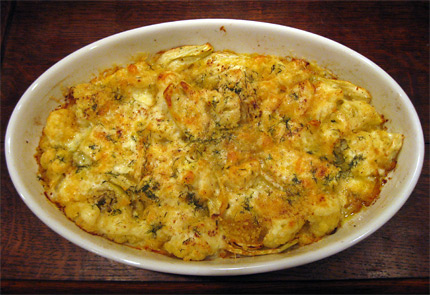 My predilection for comfort dishes means that gratins, bechamel and cheese are recurring themes, but before I begin, forgive me a small rant: there is a fine line between a dish that is richly delicious, and one that is so packed with cream and butter that you can barely eat a second bite.  Too many restaurants err on the wrong side of that line.

I remember reading the author of Cooking School Confidential write about learning the optimal way to prep potatoes for mashing in order to get as much butter into them as possible.  My first reaction was “interesting” and my second was “maybe this is why I never like the mashed potatoes in restaurants.”

It reminds me of watching Anne Burrell explain, as she grabbed a huge handful of salt, how restaurant food is tasty because it is “better seasoned.”  And I thought, “is that a euphamism for salty?”  It is true that many tentative home cooks under-salt in the cooking process, but at least guests have a chance to rectify that.  I find American Italian restaurants to be the worst offenders of over-salting.

This isn’t just about health, although that is relevant to this topic, but just the observation that more is not always better.  I understand a restaurant’s desire to exude luxury, but you shouldn’t need a red wine strong enough to punch you in the jaw to make it through more than a few bites of a dish.

Now isn’t that a marvelously hypocritical way to introduce a dish with bechamel (one with more butter than flour even!) and cheese?!  This dish is not something I would eat every night, but it was utterly delicious and while it went right smack up to the aforementioned line, it stayed just on the right side.

I’d quip that I ate my hypocrisy most happily, but perhaps the serious  analysis is that the term “too rich” is subjectively like what the judge said about pornography: “I can’t define it, but I know it when I see it.”

Making the Bechamel
Heat the milk up to a simmer and then turn off the heat.  Melt the butter on low heat in a medium sauce pan, then add the flour and cook for 2 minutes, constantly stirring the flour into the butter. Add a small amount of milk (about 2 tbsp worth) and stir in. Repeat two or three times.  At this point stir in the rest of the milk in 1/2 cup amounts, stirring constantly.  You can turn up the heat a smidgen, and keep on stirring regularly until the sauce thickens to the consistency of heavy cream.  Turn off the heat.

Make the breadcrumbs by ripping the bread into smaller pieces and pulsing in a food processor.  Spread out on a baking tray. Butter a baking dish (separate from the tray) for the gratin with the 2 tbsp, and then chop up and scatter the remaining butter over the bread crumbs in the baking tray.

Turn on the broiler and cook the breadcrumbs on the lowest rack (or set oven to a lower heat) until they are just turning golden. Remove from the oven and stir the breadcrumbs around. Reserve.

Cut off the tops of the fennel bulb, slice off a thin piece of the bottom, and discard the outer layer if really tough.  Save and finely chop the fine fennel fronds from the tops.  Cut the bulb in half and then slice into 1/2 inch thick pieces.  Cut or break the cauliflower into bite-size florets.

Scatter the fennel and cauliflower around the baking dish — you want enough vegetables to fill the dish.  Drizzle a little olive oil on top, sprinkle some coarse salt around, and mix the vegetables with two spoons.  Place under the broiler near the top of the oven for a short period to lightly brown the tops of the vegetables (keep an eye on this and do not let it burn).

Remove from the oven and turn the heat down to 350F.  Grind some fresh pepper on top and mix the vegetables again.  Cover the fennel and cauliflower with the bechamel, then sprinkle the cheese on top, and then the breadcrumbs.  Sprinkle the nutmeg and the chopped fennel fronds on top (no more than a tbsp of the fennel fronds).  Bake for 40 to 50 minutes, until golden on top. 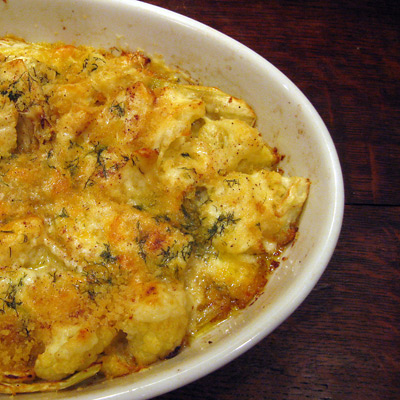