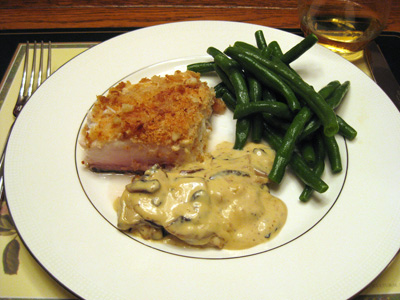 END_OF_DOCUMENT_TOKEN_TO_BE_REPLACED

I’ve been reading Julia Child’s My Life in France and the difficulties she faced trying to publish Mastering the Art of French Cooking.  In 1959, when Houghton Mifflin finally passed on the book, and before Knopf picked it up, Julia read a note from her champion at Houghton who explained the rejection, “They feel [the average housewife] wants ‘shortcuts to something equivalent’ instead of the perfect process to the absolute.”

America’s culture has changed a lot since then, but anyone who reads Simone de Beauvoir’s 1947 America Day by Day will be struck by how much has remained consistent.  The business instincts of the Houghton execs remains somewhat true today if Rachel Ray’s empire is any evidence.  Thankfully, there is room for more ambitious efforts, as Julia Child and Simone Beck proved and as new author/chefs continue to show; a recent example is Paul Bertolli’s almost literary Cooking by Hand.

Ratatouille strikes me as a perfect dish to highlight the merits of the two mindsets (and there are indeed merits to both).  Sometimes I will throw together a ratatouille very quickly, let all the components stew together for a while unaided, and enjoy a perfectly good rendition.  However, with a little more effort and time, you can take the dish to a different level entirely.

On Friday evening, after picking up some lovely fresh vegetables from the local farm, I rolled up my sleeves and put together an adaptation of Lulu Peyraud’s ratatouille from Richard Olney’s cookbook Lulu’s Provencal Table. It is considerably more involved than my usual, but the result, which we ate the next evening, was the sweetest, most delicious ratatouille I have had in a long while.

END_OF_DOCUMENT_TOKEN_TO_BE_REPLACED

Before diving into the recipe, we want to welcome you all to the new home of Constables Larder.  Thank you for joining us here, and please let us know what you think. If you are an RSS subscriber to the old blog, please unsubscribe that one and sign up here (although if you are seeing this post, it means it’s working automatically, miracle of miracles).

Spring is finally starting to emerge, and my palette is very Mediterranean-focused. Last weekend, this manifested in the form of a galette — essentially an onion tart with the addition of zucchini, olives, garlic, and tomatoes.  Instead of a pâte brisée, I decided to try a Provençal pastry (pâte à l’huile d’olive) which Richard Olney describes in Simple French Food (my new flame). It is easy to make, quite tasty, and has a rustic personality and texture.