This was a delicious variation on cauliflower mash that I threw together and wanted to remember. The fennel adds a bit of sophistication, but it was still wolfed down by our 4 year old.

Cut the fennel bulb into eighths (halve, halve again, halve again), and chop the cauliflower into similar sized pieces. Peel and quarter the potatoes.  Fill a large pot with about 1/2 inch of water (so the vegetables are not totally immersed) and bring to a boil.  Toss in the potatoes first, then everything else, cover so the steam is captured, and keep on a light boil until tender.  Drain.

In batches, spoon the vegetables into a food processor and puree (you will probably need to pulse, stir and push the fennel pieces down so they get fully pureed), and then spoon each batch of puree into a large bowl.  Once you have everything pureed, add the butter, salt, pepper, and heavy cream to taste.  Note: I usually make my mash potatoes with milk, not cream, but think the cream really works here.

This was a wonderful side dish, and I can see it being used as a nice base for either a hearty fish or chicken breasts.  I’m imagining lots and lots of mushrooms… 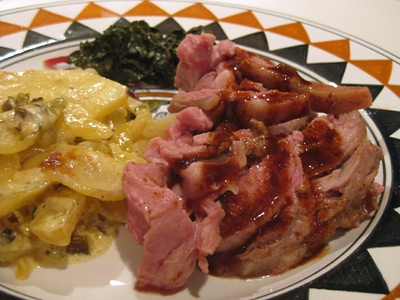 Lisl first made this lamb roast not long after we met. If I went for sensational titles I’d call this the “how to impress your new boyfriend without slaving in the kitchen, but make him think you did” lamb roast.  It actually remains my favorite way to cook lamb by a long shot, and it is so easy to do that it isn’t really a recipe but a simple process (which is one reason why I have time to blog it at the moment).

Lisl prefers to do this roast with a leg of lamb, but we used a boneless lamb sirloin roast and while it fell apart a bit when slicing, I found this cut to be incredibly good.  I also loved the gratin we served with it, which I’ll describe at the bottom of the post.

END_OF_DOCUMENT_TOKEN_TO_BE_REPLACED

This is a simple yet surprisingly sophisticated dish from Richard Olney’s Simple French Food. I’ve long been a fan of making scalloped potatoes with milk and/or cream. The use of beer makes the dish a little less rich, which can be a good thing, yet still flavorful, and the onions add a sophistication that I really enjoyed.

END_OF_DOCUMENT_TOKEN_TO_BE_REPLACED

While much of our Thanksgiving dinner was pretty traditional to our family, Lisl and I decided to change up the usual scalloped potato dish and add fennel to the gratin. Stacey, of Stacey Snacks, mentioned that Ina Garten had a great recipe, and I found a version on the Food Network website. I made a few changes, reducing amounts and layering rather than mixing in a bowl (I just love how attractive the layered approach looks when it comes out of the oven).

The results received universal approval from the adults at the table (munchkin, not so much, but the three-year-old palate is a frustrating thing to cook for). This was a convenient dish as well since I was able to bake it 90% done before the turkey took over the oven, and then just finish it off while the turkey rested.

Thinly slice the onion. Remove the fronds and 1/4″ of the base of the fennel, cut in half, remove the core, and then thinly slice.

In a saute pan, heat the butter and olive oil on medium-low and cook the onions and fennel for about 15 minutes, stirring occasionally. While this is cooking, thinly slice (1/8″ or 2mm thick) the potatoes.

Place in the oven and bake for 1.5 hours until the top is nicely browned and the potatoes are very tender. Back in June, when we first started this site, I posted a number of old, favorite recipes including shepherd’s pie. When the air gets cool, Lisl and I find no comfort food more satisfying than this dish. My version was originally inspired by the Dean & Deluca cookbook, and I make it slightly differently almost every time. Tonight was no exception, so I’ll post tonight’s approach here and note the differences to the old recipe at the end.

Boil the potatoes in lightly salted water until cooked all the way through. You can cut them into smaller pieces to speed cooking. Drain the potatoes, return to the pot, add the butter and mash. Add 1/2 tsp salt, 1/4 tsp pepper, the parsley and milk. Taste for salt. Add milk – your exact amount of milk will depend on size and number of potatoes. You want the mashed potatoes to be quite moist without crossing over into being liquid. (Frankly, I would say make the mashed potatoes the way you really love to make them; just don’t make it too dry as this all is going to bake before being served).

Cook the bacon in a large cast iron pan to the point where they are almost crispy, then remove and chop. Cook the ground beef in the bacon fat until browned, adding in 1/2 tsp of salt, 1 tbsp of worcestershire sauce, and the dried oregano. Once browned, remove to a bowl.

Add a splash of olive oil to the cast iron pan and saute the onions on medium-low heat until they start to turn translucent, then add the carrots. Cook for 10 minutes, stirring occasionally, then turn up the heat slightly and add the wine and tomato paste. Continue to cook, stirring regularly, for another 5 to 10 minutes, then add in the ground beef, chopped bacon, another tbsp of worcestershire sauce, another pinch of salt, and the pinch of red pepper flakes. Let this cook together for 5 or 10 minutes, stirring occasionally, and taste for salt and oregano. You’ll note that I’m writing flexible cooking times, but I prefer more time when possible in order to let the carrots soften. If it starts to dry out, add a little more wine (or water or beef stock). Forming the Pie
Turn off the heat and flatten the mixture out. With a large ladel, place your mash potatoes on top carefully in dollops, trying not to allow the potatoes and meat base to mix. Take a fork, hold it mostly horizontal with the curve of the tines pointing down (like the bottom of a boat) and use this to spread the mashed potatoes around until it evenly covers the dish. I find that this allows you to spread the potatoes more delicately and thus prevents everything from mushing together. For aesthetics, I also like to use the tines of the fork to decorate the top with various patterns.

Place in the oven and bake for 30 minutes. Then turn on the broiler for a few minutes to brown the top, keeping an eye on it so it doesn’t burn. Let cool for 5 or 10 minutes, then serve.

Notes:
In the original recipe, the exact quantities of several things were slightly different. The other version also added 2 tsp of flour to the beef while cooking, used rosemary rather than oregano, and vermouth rather than white wine (I love cooking with vermouth), and included some beef stock. I started cooking this dish back in 2001 while we lived in London, and where “bacon” is more like what American’s call Canadian bacon; I’ll often use that instead of typical American bacon.