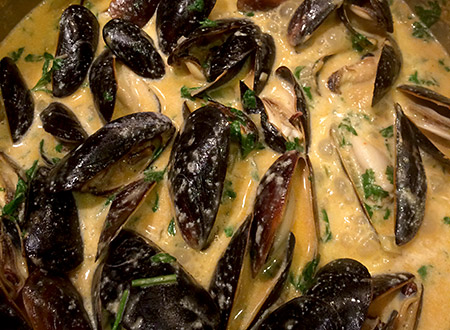 Clean and de-beard your mussels under cold water. Discard any that are open or have broken shells. If you bought wild mussels, soak them in cold fresh water for 20 minutes before cooking.

In a large soup pot, heat up the olive oil on medium-low heat. Saute the onions, garlic, ginger and tomato paste, stirring regularly so that the garlic does not burn. Add the coconut milk, vermouth, and water. Add in a few slices of your hot pepper (I used 4 thin slices of a jalapeno, but if you want it really hot, add more. If you use dried pepper flakes, start with just a pinch). Add a pinch of salt and the same of freshly ground pepper.

Simmer for 15 minutes so that the flavors blend. Add a bit more water if it starts to thicken too much.

Taste for salt and pepper, but leave it just slightly under-salted.

Serve in a bowl with lots of the broth and good bread on the side.

p.s. fun tip for eating mussels: use an empty shell as your utensil to pinch the meat out of the other shells. 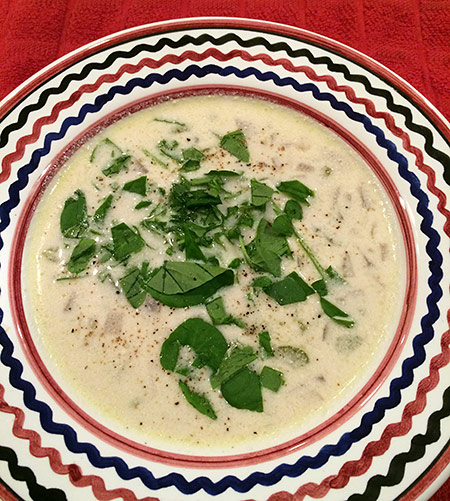 This is a riff off of my grandmother’s oyster stew recipe, which I’ve adapted for clams and lightened up a bit. Lisl loved it. Great with a crisp white wine.

Recipe
Rinse the clams. Heat up a soup pot, place the clams in the pot on a high flame, and pour in a bit of white wine to create steam. Cover and cook for a few minutes — just long enough for the clams to open. If most are open, turn off the heat and keep covered for another minute or so for the rest to fully open. 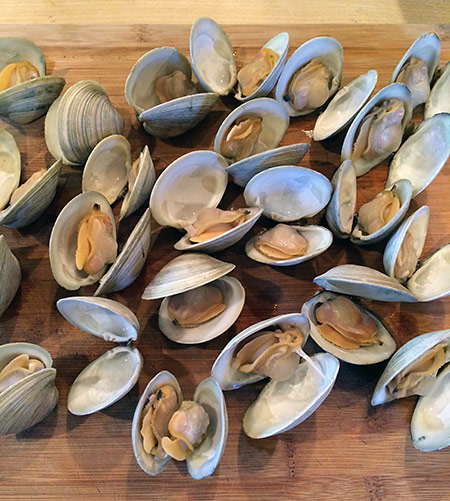 Remove the clams from their shells and chop up.

Save the brine-y liquid from the soup pot and put to the side.

Rinse the soup pot. Put back on the stove on medium-low heat. Melt the butter and add the diced onion and minced garlic, stirring to make sure they do not brown. When the onion is translucent, add the celery and cook until the celery softens.

Add the cream, milk, a cup of wine, half a cup of the reserve liquid from steaming the clams, and a cup of water. Add the clams. Turn the heat down to low and simmer very lightly so that the cream does not curdle.

Add 4 drops of worcestershire sauce (or to taste) and a pinch of fresh pepper. After 15 minutes, taste. If you want more of that briney flavor from the clams, add more of the reserve steaming liquid (I ended up using about 1 1/2 cups).

Serve with a bunch of the chopped watercress, and a nice baguette. 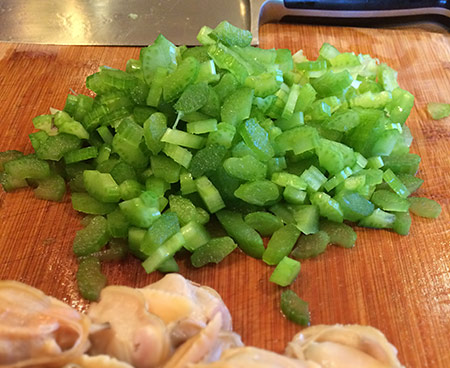 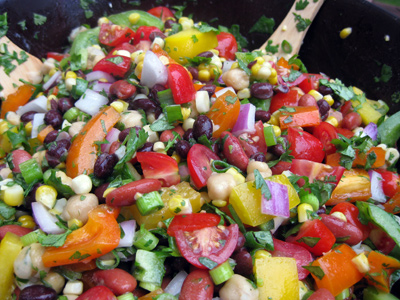 When picnic season rolls around, this is always my most requested dish. I’ve had a number of requests to update the recipe here, so with no further ado:

The instructions are as simple as “combine it all together”, but it is always better if you make it a couple hours ahead of time so that the lime juice permeates more. A few additional notes:

2. for the corn, you can boil the corn for 4 or 5 minutes, but I usually microwave them for no more than 2 minutes in the husk. Then I slice the niblets off with a chef’s knife and then break up the niblets by loosely running the corn through my fingers

Tonight’s dinner was an off-the-cuff mental mashup of braises I have historically done and some flavors I’ve been trying via Rick Bayless recipes. The results were delicious. The spicey sauce was rich and delicious — very much like a mole sauce but without chocolate. For tonight’s meal, I worked with a 3lb pork shoulder but I’ll often do these kinds of dishes with a bigger piece.

Preheat your oven to 290F or 300F. (it will be fine at either, but lower and slower is better if you have the time)

Heat up your dutch over on a high flame. Once the pot is hot, add a little oil and sear the sides of your pork shoulder. By the way, if your butcher leaves the fat on the pork shoulder, score it with a knife first one way, then perpendicular to the first cuts, but don’t take it off!

Once seared, remove the pork shoulder, turn the heat down to low and toss in the onions. It is actually a good thing for this dish for you to let the onions brown a bit with the very hot surface, so don’t over-stir them, but make sure they do not burn.

With a mortar and pestle, loosely grind the coriander seed, cumin and peppercorns, and mix those in along with the mexican oregano (a different herb from Italian oregano). Then add the garlic (you want to wait to this point to add the garlic so that the pot has cooled a bit and doesn’t instantly burn the garlic turning it bitter). Add in the ancho chiles and chipotle peppers (with a little of the adobo sauce if you got them from a tin).

Turn off the stove top heat and place the pork shoulder on top of the onions, fat side down.

Sprinkle the salt around, and add the tomatoes around the pork. You can fire roast your own tomatoes simply by charring them underneath your broiler, but I was pressed for time so simply used a tin of Muir Glen fire roasted tomatoes, which supermarkets around here have started to carry.

Pour in a beer — in this case I used a mexican-style lager. You want the liquid to be about a third of the way up the side of the pork. Add more beer or water if needed.

Cover your dutch oven, place in the oven and cook. About half-way through, turn the pork so that the fat side is up.

If you have a 2-3 lb pork shoulder, about 4 1/2 hours is enough. For a 5-6 lb shoulder, expect about 6 hours. You want the meat falling off the bone and easy to pull apart with a fork.

Move the pork to a cutting board and use two forks to pull it apart. Sprinkle with salt (and taste for salt).

Skim excess fat off the top of the liquid and vegetables in the pot, and then puree it with an immersion blender to create your sauce.

Serve with white rice and some lime pieces. The lime sweetens the dish and brings out the flavors even more.

I winged this dish on Friday night and enjoyed it enough that I wanted to record the essence. The ratios are not battle-tested, but one of the prime purposes of this blog is to help me remember stuff like this.

In a large saute pan, melt the butter and olive oil on medium low heat and then add the onion. Cook slowly, stirring occasionally, until the onions are soft and translucent. Add in the mushrooms, thyme, a pinch or two of hot chili pepper flakes, and some salt and pepper and saute until the mushrooms are soft.

Add the flour and cook, stirring, for 2 minutes. Add the vermouth (or wine) and after a few minutes add the milk. I don’t know exactly how much milk I put in but I would guess about 2 cups. Bring the milk to a very gentle simmer, stirring fairly frequently, and control the heat so that it does not start to simmer more aggressively. Stir in the mustard and add salt and pepper to taste. Cook for another 10 minutes or so, giving the sauce time to thicken and come together.

Don’t forget to start the rice.

Add the chicken, cover, and poach until they are cooked through (probably 5 to 10 minutes, depending on thickness of pieces).

Serve the chicken on top of the rice, heaping on the sauce. 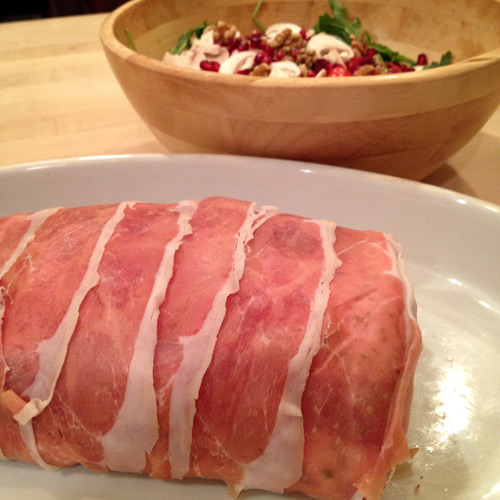 I’m always a fan of the combination of taste and simplicity, especially these days when my schedule does not allow for extended adventures in the kitchen.  This dish was a snap to make, and tons of flavor. The oregano and prosciutto combine beautifully and seep into the roast.

Pre-heat the oven at 350F. Sprinkle the loin liberally with freshly ground pepper and fresh or dried oregano. Because the prosciutto has so much salt, I would argue not adding any salt at this point.

Wrap the loin in prosciutto, overlapping each layer. Do not use cheap domestic (US) prosciutto — it has weak flavor and your results will be boring.

Roast the loin in the oven — it can take 30 minutes to an hour depending on the size of the loin. Remove the loin when an instant-read thermometer shows 135 degrees. Loosely cover in foil and let rest for 5 minutes, then slice and serve. Taste and only add salt at this point if you think it is needed.

We served this with a nice green salad, roasted brussel sprouts, and a hearty Italian wine. 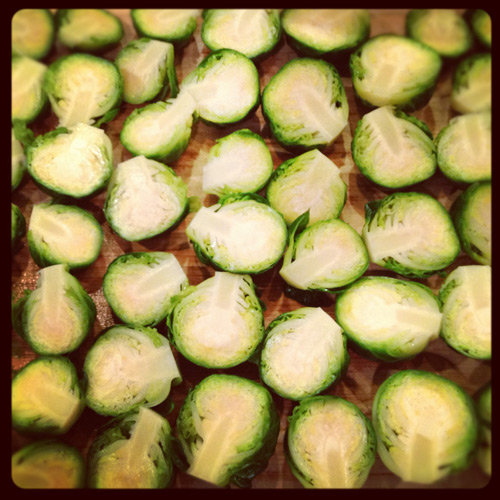 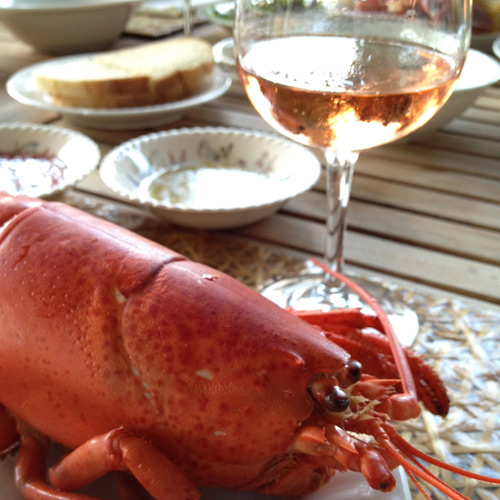 Last night, we had our annual family lobster feast. While much of my family still goes for the butter-lemon sauce, I have taken to the sharper taste of mignonette. This year, we played around with the ingredients a bit and I really liked the outcome.

Mix the ingredients together and let it rest for 20 minutes before serving so the shallots have a chance to sweeten the vinegar. 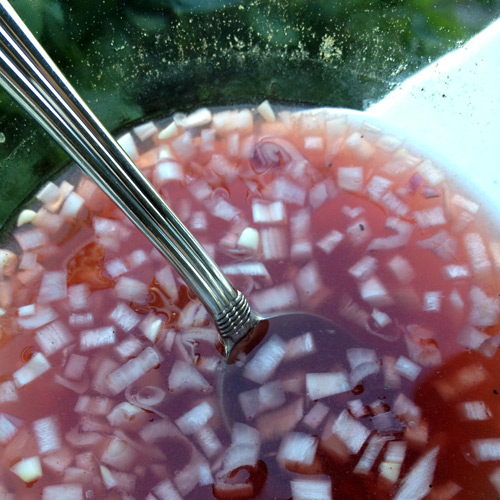 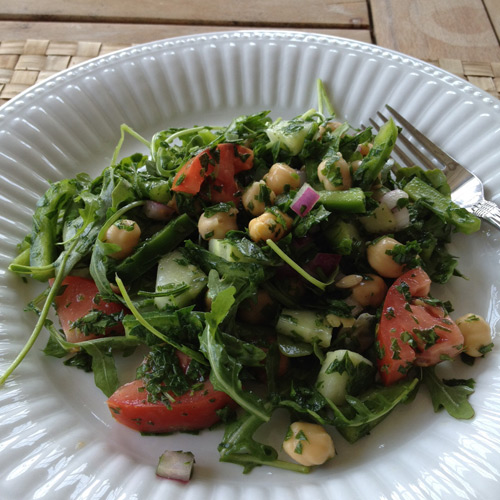 Ah to be on vacation and have time to food blog again!  I tend to eat a lot of salad for lunch in the summer time.  I love tabouli but on its own, tabouli would leave me hungry.  So I created this salad in the same vein (tons of parsley!) but going for a heartier meal. It uses my “go to” salad dressing, of which I never tire.

Combine all the salad ingredients in a large bowl, and then add the dressing. Taste for salt — the chickpeas might want a bit more salt than a typical green salad.  One twist is to make the dressing first and pour over the chickpeas, letting them marinate before you add the other vegetables.

To make the dressing, first squeeze the juice of a lemon into a bowl or mug (remove any seeds). Add a dash of vinegar (about a teaspoon). Mince up a shallot (or the red onion) and add to the liquid and let sit for 10 minutes or so. 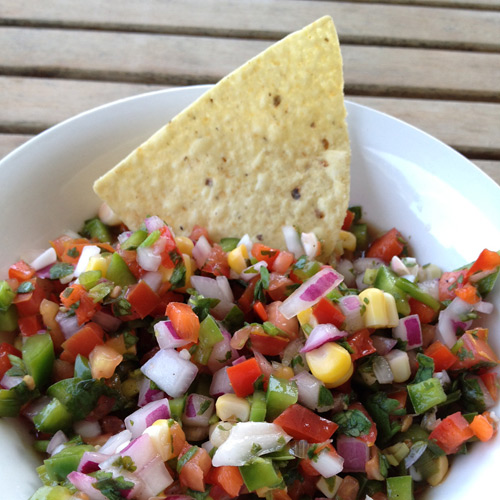 In summertime, there are few things I like more than fresh salsa and a good beer. I make variations of this recipe, as evidenced in this blog’s history, and can never get enough of it. It goes great with chips, on toasted bread, on fish or hamburgers… or just straight up !

Chop it all up, toss in a bowl, squeeze the juice from two limes on top and add a dash of red wine vinegar (maybe half a teaspoon’s worth). Taste for the level of lime, and add salt and pepper to taste. 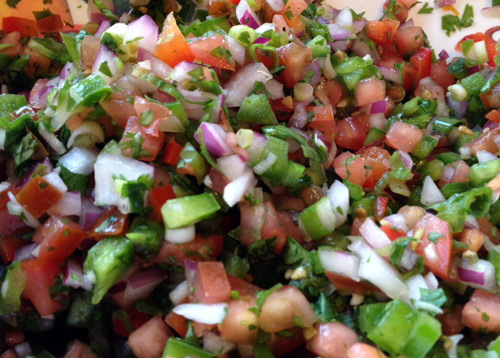 Store mixes just can’t compare to homemade. It is a general rule that is hard to beat, and eggnog is no exception. Every season I try to find an excuse to make a version of my grandmother’s simple eggnog recipe. This weekend, we had a small gathering to let kids run amuck and I treated myself and the other parents to the following variation:

Separate the eggs whites and yolks.

Combine the yolks with the sugar and beat until very pale.

Stir in the light cream and half of the heavy cream, a pinch of ground cloves and two big pinches of ground nutmeg (about 1/4 tsp).

Beat the rest of the heavy cream until stiff and fold in.

Beat the egg whites until stiff and fold in.

Add additional nutmeg and liquor to taste. If memory serves for this latest batch, I added in an additional 1/4 cup bourbon, 1/8 cup brandy, 1/8 cup rum on top of the above amounts. (note: if you add more liquor, keep the ratio 2 parts bourbon to 1 part brandy, 1 part rum)